If you’re looking for our setup guides, please click ‘Getting Setup’ on the navigation menu or click here. You’ll find guides on installing and updating the game, setting up Ashita or Windower, and related guides.

Launching via Ashita or Windower closes immediately or doesn’t start

When the boot loader appears, attempts to connect, then immediately disconnects and closes, a common cause is that the client files are too far out of date. Be sure to open up PlayOnline Viewer and verify that your client files are at least as new as those used by the server. You can see the current server version here.

If you’re coming from Nasomi, Supernova, Wings, Eden, or any server that has a custom installer, you can also get this error.

For Nasomi, there’s a process to patch your installation to work with “retail” Final Fantasy XI. You can see the full instructions here: https://nasomi.com/wiki/index.php?title=Config:Installing#Retail.2FNasomi_swap.

For other servers, please see their respective wikis for guidance.

Launching via Ashita causes ‘bootloader’ to not respond (crash) 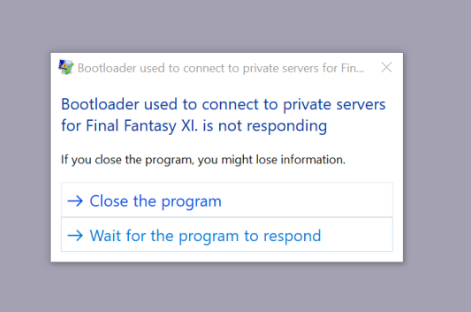 This error can be caused during a new installation when using the default -1 registry values in Ashita.

Updating the values for Window Size, Background Size, Menu Size, and Startup Position can resolve this.

For example, if your playing full screen at 1920x1080, try the following options for a full-screen, windowed (can tab out/multi-monitor) 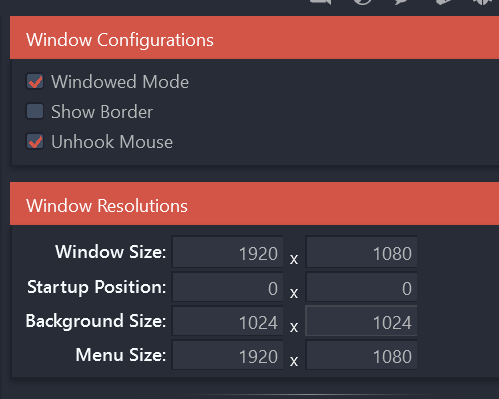 If you’re playing in “Windowed Mode” with a resolution that fits your full screen, be sure to have “Show Border” unchecked or your menu, chat bars and UI will be shifted down and out of sight to account for the 50-75px that the border takes up at the top.

If you don’t have the Visual C++ Redistributable Packages installed, you’ll need to install them (this isn’t very common since almost all games use these).

There are many different versions of these packages. Final Fantasy XI, Ashita, and Windower require the MSVC 2015 version. Even if you’re running on a 64-bit (x64) version of Windows, you’ll need the 32-bit (x86) MSVC libraries for FFXI.

In Windows 8 (?) or higher, you’ll need to enable DirectPlay in the Windows Features dialog. For new players/installations of FFXI, this setting almost always needs set as the default installation of Windows doesn’t include this legacy feature.

You will need to restart your computer after the installation.

Launching causes a crash or “failed to initialize instance of polcorecom”

If you’re running an EU version of the client, this can be caused by Ashita or Windower not properly detecting your PlayOnline Viewer locale.

In Ashita, add the following:

In Windower, change the following settings by editing your settings.xml file.

Attempting to connect, but receive no error message

When connecting via the bootloader (xiloader for Windower or Ashita), if players appear to log in and are immediately sent back to the login screen, it’s likely that they have exceeded their IP-based connection limit. The server supports 3 concurrent connections by IP at a time via our Server Guidelines.

Players may also experience this if they’re multiboxing three characters and one disconnects. You will need to wait for that character to log out completely (or Unstuck them via the Members Portal).

Attempting to multi box randomly causes the client to crash

Unfortunately, FFXI doesn’t handle multiboxing (playing more than one character on the same computer) on DSP very well. The server handles your connections by IP and multiboxing tends to ‘cross wires’ at time on which character is doing what. With that in mind, it’s best to ensure that one character at a time completes most actions.

How do I setup my controller?

Verify that your /data directory has been copied from the PlayOnlineViewer folder into the FINAL FANTASY XI folder. See step 10 here.

There are two potential causes for a POL-0001.

First, a POL-0001 can be caused by a core DSP bug (that’s existed since 2014) that pops up when you have more than 4 characters on a single account. Please keep it to 4 characters per account (you can create as many accounts as you like on Nocturnal Souls). If you receive this error, please contact a GM for assistance.

Second, players who have multiple accounts on the same IP will sometimes receive a POL-0001 if they’ve tried to log in more accounts than they have allowances for and forced a disconnect in one of their characters. DSP does a poor job managing which character belongs to which session when players multibox. To resolve this, log out all characters and log them in one at at time up without exceeding the maximum character limit. 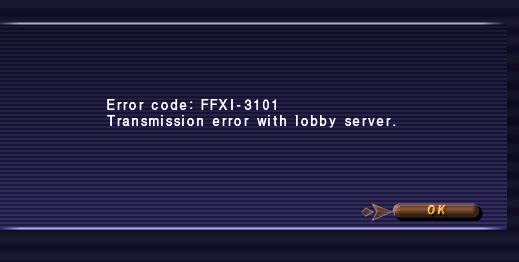 This error is caused by a few different errors:

This “Protocol Timeout Error” can be caused by a few different things:

To resolve this, try the following:

Final Fantasy XI is like most online games where if you get logged out or disconnected, your character stays online for a few minutes until it times out (you may see players who are “red dotted”, which means they’re in the disconnecting state).

Players need to be fully disconnected and out of the game before they can log back in. You can wait a few minutes, or use the Members Portal to “unstuck character” (Members Portal > Me > {Character} > “Unstuck Character” button on right side) to force the character to disconnect and reposition them in Jeuno.

The FFXI-3001 error is most commonly caused by a network port used by FFXI being unavailable or the connection cut off. This could be one of a number of issues:

There are times that require us to “version lock” the server due to an extremely breaking change.

The FFXI-3331 error means that the server is currently version locked to “greater than or equal” the one listed on the home page and your client is out of date.

Please take a moment and update your client to the latest version to log in. You can find the a walkthrough here.

Similar to the POL-0033, a FFXI-3305 is caused by a player trying to log in a character that is already actively logged in and has not timed out or can occur if the player has entered into a zone that is currently disabled.

Players need to be fully disconnected and out of the game before they can log back in.

If this doesn’t resolve the issue or your character has entered into a zone that isn’t operational, members can use the Members Portal to “unstuck character”.

FFXI-3322 when creating a character

The FFXI-3322 is a client-side error that you can receive at signup. This is caused by a character name violation.

Unfortunately, the naming rules are handled by the local game client, not by the servers, so we do not have any control over this (or showing a non-Japanese error message).

We’ve found that romanji letter combos that translate to swear words in Japanese tend to be caught by this frequently, even though they’re harmless in other languages.

This can happen if you’re on an unstable network with high packet loss, a firewall or anti-virus has locked a port, or you’re multi-boxing and logging in characters too quickly.

To fix this, close the client and reconnect. If this doesn’t resolve it, a reboot of the computer to clear any lingering port usage will usually resolve it.

“Downloading Data” then disconnect when selecting a character

Getting stuck at “Downloading Data” can be caused by numerous network and client issues.

Verify that you don’t have any plugins that could be causing a glitch. The following plugins are known to cause this issue for some players.

If you receive this while moving zone to zone (and into a known working zone), it’s possible that you’re also having internet connection issues and have lost your connection to the login server (corrupting your session’s account key). The following may solve your problem:

Frequent “black screen” when changing zones or after playing a while

This is common for players that have newer video cards and/or laptops with dual video cards (integrated Intel and NVidia/AMD, for example). We suggest using a D3D9 replacement/proxy that converts FFXI’s older DX8 API calls into DX11 or DX12.

This can also be used by players not having any issues as many find that they substantially gain video performance when using a D3D9 proxy.

You can use Reshade, dgVoodoo2, or atom0s' proxy for Ashita to accomplish this.

We prefer using dgVoodoo2 as it’s easy to setup with Ashita or Windower and has the highest level of customization. You can find our walkthrough on setting up dgVoodoo2 here.

Characters on my select screen are not my own!

This is, strangely enough, a rather common DSP bug–especially for those who play on the same IP and/or multiboxers. Players cannot ACCESS those characters (they’ll receive a POL-0001 error).

To fix this, close the game and attempt to reconnect.

This is a common problem if your window resolution matches your screen’s resolution (aka “full screen”), but you still have “Show Border” enabled.

Be sure to have “Show Border” unchecked or your menu, chat bars and UI will be shifted down and out of sight to account for the 50-75px that the border takes up at the top.

Why do I see so many things called ‘NPC’?!

You need to install the Renamer addon. Please take a moment to review our guide for Renamer.

Do note that after installing everything, if you are logged in, you need to log out and log back in for the change to take effect.

My status effect icons all say “DEBUG:” on them.

You’re likely using XI-View for the higher quality icons. Those icon packs are frequently updated to reflect changes to status effect IDs and/or add new icons. You can get the latest version here.

Why do some abilities show up as “.” or “Special Attack”?

This is common with some of the higher level avatar abilities because they do not properly exist in how the private server code manages pets (pets are wired up as monsters and use monster abilities). Addons such as Battlemod can crash when using these skills–it’s recommended to disable it and/or update the preference to ignore Pet skills.