In order to participate in Voidwatch, you must satisfy the following conditions:

If this is your first time visiting the past, during the first cutscene with the Cavernous Maw, be sure to click back through to the present to unlock the maw, then return to the past. Not doing this will require you to BACKTRACK to the maw to reopen it.

After completion of one of these quests, you will receive a stratum abyssite (initially obtained from a “present day” city area Voidwatch Officer). You can then also begin obtaining voidstones.

In order to initiate a Voidwatch battle, the appropriate stratum abyssite on the initiating player must be advanced at least as high as the tier associated with the battle (see the tables below under “Voidwatch Ops”). Only the one player initiating the battle needs to fulfill this requirement. Higher tier stratum abyssites are obtained either by upgraded automatically, or by completing certain Voidwatch Quests.

The Voidwatch Officer NPC will also provide the player with voidstones on request. Voidstones regenerate over time, one per 4 hours and the Voidwatch Officer will store up to 24 hours worth of stones (6 stones). This process is not automatic, so you need to talk to an Officer to receive your allocation of voidstones.

You can hold an infinite amount of Voidstones, and your current amount can be found in [Status] > [Currencies] in your menu, by speaking with the Voidwatch Officer, or under the Currencies tab on the Character’s profile in the Members Portal.

Players can also acquire Voidstones by trading gil and conquest points to Voidwatch Purveyor located in the three major cities. The rate is 250,000 gil and 20,000 conquest points per voidstone.

For more information, BG Wiki’s Voidwatch section can be used for information about NPCs, flow, and such; however, keep in mind that mob abilities and level are MUCH different on Nocturnal Souls than what is listed in their wiki. For level and drops, be sure to check out the Members Portal.

Players must initially speak to a Voidwatch Officer in order to obtain a Stratum Abyssite key item. Each key item needs to be acquired only once and begins a “line” for Voidwatch.

Any mention of speaking with the “present-day” Voidwatch Officers (or the VWO’s in general), players should speak to these officers in one of the three main cities. The NPCs in Jeuno, Outlands cities, and past-day cities will not update quests that do not directly pertain to them.

Players can participate in all 3 city paths at the same time by speaking with each present-day city Voidwatch Officer and receiving the first tier of abyssite (and a voidstone).

After defeating all of the monsters within a tier your stratum abyssite will automatically advance to the next tier.

Players no longer lose their prior tier stratus abyssite on upgrade, allowing them to continue to challenge previous tiers of VWNMs.

This VERY condenced chart shows the flow from tier to tier, city to city (click it to enlarge.) 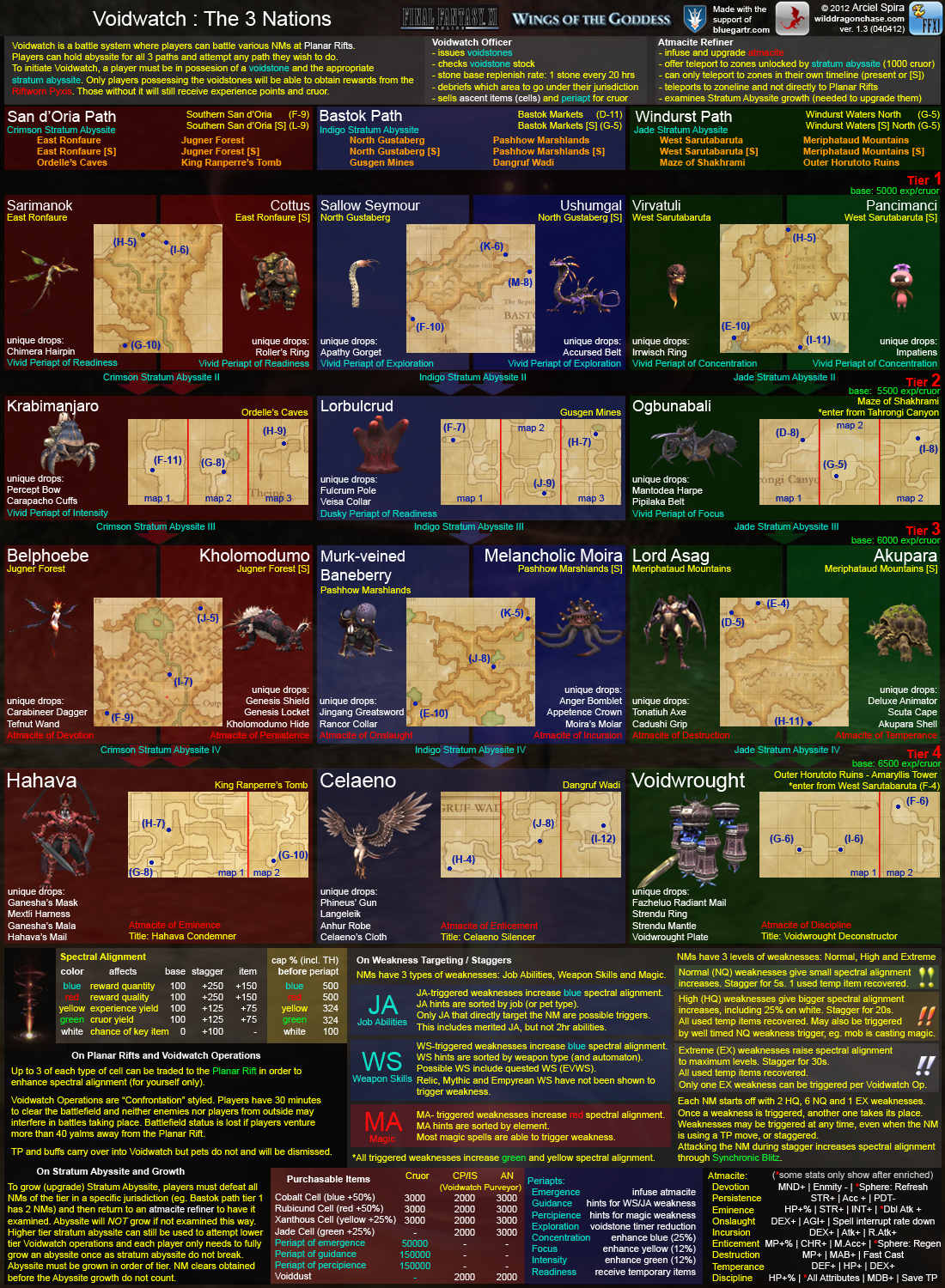 Once the city paths are complete, you must complete the full requirements of the Guardian of the Void quest (except the Walk of Echoes part), which includes traveling to Pashhow Marshlands [S] for a cutscene and then return to a Voidwatch Officer in one of the present-day main cities.

Once this is complete, you’re next stop is Jeuno.

You should have the quest Battle on a New Front under your Crystal War quest log at this point and the white stratum abyssite.

After completing Jeuno Tier II, talk to a present-day Voidwatch Officer located in one of the main cities to receive a cutscene and alarum. Go to Ru’Lude Gardens and trigger the Audience Chamber door. You will receive a cutscene, the White stratum abyssite III, and the Voidwatchers Emblem: Qufim.

You should have the quest VW Op. 126: Qufim Incursion at this point along with the White Stratum Abyssite III from the prior quest.

After completing Jeuno Tier III, talk to any present-day Voidwatch Officer and proceed to Ru’Lude Gardens and talk to the Audience Chamber door.

Next, go to the Verdical Conflux in Pashhow Marshlands [S] for a cutscene with Cait Sith and Kupofried.

Next, talk to any Voidwatch Officer in the present and return to Ru’Lude Gardens to the Audience Chamber door. You will receive the White Stratum Abyssite IV and Tricolor Voidwatchers Emblem and your VW Op. 126: Qufim Incursion quest will complete.

At this point, you will not have a Voidwatch quest, however, the White Stratum Abyssite IV will allow you to spawn the following battles.

At this point, you will not have a Voidwatch quest, however, the White Stratum Abyssite V will allow you to spawn the following battles.

At this point, you will not have a Voidwatch quest, however, the White Stratum Abyssite VI will allow you to spawn the following battles.

At this point, you have completed the Jeuno Voidwatch operations and can proceed to the Zilart path.

Requires acquiring the Ashen stratum abyssite from Kieran in Norg and starting the quest Voidwatch Ops: Border Crossing. Kieran will provide both the quest cutscene and the Ashen Stratum Abyssite. This can only be started after completing the entire Jeuno Tier VI line.

From here, you can unlock two individual missions from Hildegard in Kazham and Gushing Spring in Rabao. They can be done in any order, but both side quests (and 6 VWNMs) must be complete before you can proceed to the next tier.

Return to Hildegard to complete the Elshimo path.

Return to Gushing Spring to complete the Kuzotz path.

Complete both the Kuzotz and the Elshimo paths, then return to Kieran in Norg to complete Zilart Tier I and begin Tier II.

Engage in and complete the three Zilart Tier II Voidwatch battles in the Li’Telor region:

The Mimic King’s Pandora attacks have a chance to crash your client if you’re running any sort of timers or duration plugin and/or are running at 60 FPS. Recommended to disable these plugins and reduce FPS to 30 before engaging the fight.

Engage in and complete the three Zilart Tier III Voidwatch battles in the Tu’Lia region:

After defeating all 3 VWNMs, return to Norg and speak to Kieran to complete the Zilart Path. This will complete the Voidwatch Ops: Border Crossing quest in your journal.

Speak with the NPC Owain in Tavnazian Safehold at (H-6) for a cutscene. Choose to participate in voidwatch operations to receive Hyacinth Stratum Abyssite. Defeat the following Voidwatch notorious monsters in Promathia areas:

Kill Bismarck in Bibiki Bay (F-9) and return to Owain to complete the Tavnazian Path.

Kill Morta in Aydeewa Subterrane (G-8) and return to Camille to complete the Aht Urhgan Path.

At this point, the Voidwatch operations are complete. The finale in Provenance does not exist at this time.