Players can get started with Dynamis Divergence with the following requirements:

To unlock access, players will need to acquire the following and trade it to Aurix in Ru’Lude Gardens (G-8) through the dimensional veil.

On trade to Aurix, players will receive an Empty Hourglass key item and have access to Dynamis - San d’Oria [D].

Access to additional Divergence zones requires completing the prior zone and acquiring the “Dominator” title when defeating the Disjointed. Titles must be acquired in order–Sub Boss > Zone Boss > Disjointed, or Trespasser > Infiltrator > Dominator.

Players are permitted two hours in the zone upon entry. Leaving the zone will cause players to be immediately locked out–so be careful with those revives!

After two hours, players are exited from the zone and can re-enter in 36 hours.

Each Dynamis Divergence zone has its own lockout–players can explore Dynamis - San d’Oria [D] and Dynamis - Windurst [D] within the same 36 hour period.

Divergence zone progression is broken into three phases. Participants will move the zone phase to phase based on what bosses have been defeated.

Phase 1 is the default phase of the zone. No bosses have been defeated or are in progress and monsters are at their base level of stats and aggro ranges.

Phase 2 starts once players have defeated the zone mid boss (the large tombstone). The mid boss has a 100% chance to drop the 6th Fiendish Tome page used to spawn the mega boss.

During this time, all monsters have enhanced stats and a slightly larger aggro ranges.

During this phase, eight (8) Elemental Fetters are scattered throughout the zone as part of the Disjointed encounter.

It is optional to defeat these Elemental Fetters, however, for each fetter defeated, the Disjointed will lose 10% of its damage resistance (aka: without defeating any, it has -80% damage taken from all sources).

Players can force the zone into Phase 3 at any time by trading the required Fiendish Tome to the Nightmare Wellspring. This will cause the Elemental Fetters to spawn around the zone. Trading it again will spawn the Disjointed. This is particularly helpful for players re-entering the zone after farming/saving up several spawn items from a prior run.

Mid, Mega, and Disjointed Bosses will despawn after being unclaimed for five minutes.

Drops in Divergence are made up of three parts: shards, void patterns, and materials. Each zone drops a unique armor piece as well and all zones have the potential to drop chest shards and patterns. Drops are, for non-boss mobs, job specific. For example, a Dragoon-type monster will drop dragoon shards and patterns.

In addition, each zone drops a unique Volte set and all Disjointed bosses drop the highly-prized Volte Jupon set (the all jobs TH set). NOTE: We decided to leave the enchantments off of the chest armors as they are of low value and would prevent players from augmenting the items.

Players will enter Divergence in Southern San d’Oria at the Enigmatic Footprints near the East Ronfaure gate. 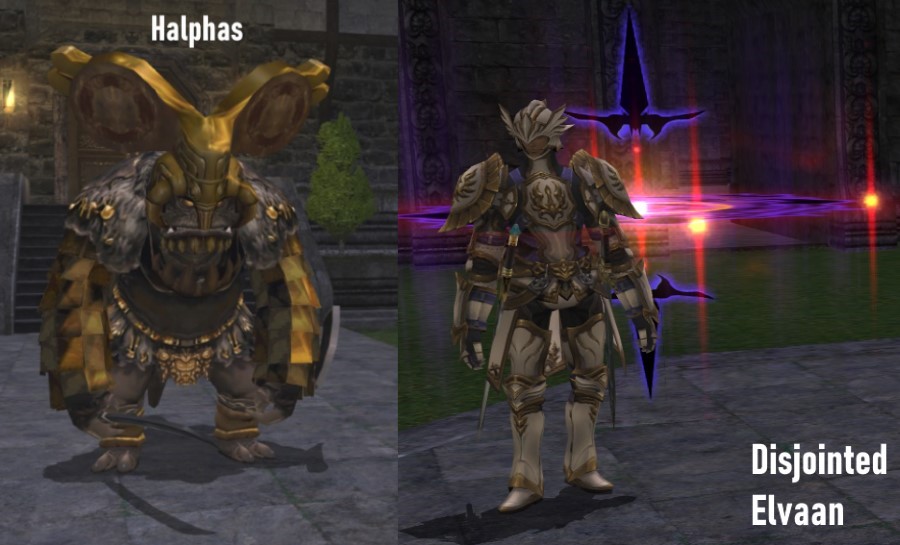 Players will enter Divergence in Bastok Mines at the Enigmatic Footprints near the South Gustaburg gate.

Players will enter Divergence in Windurst Walls at the Enigmatic Footprints near the entrance to Heaven’s Tower gate.

Players will enter Divergence in Ru’Lude Gardens at the Enigmatic Footprints near the Deliveries Agent at (F-9).

Trade Fiendish Tome page 22 through 26 to the ??? by the Auction House.

Trade Fiendish Tome page 27 to the ??? by the San d’Oria Embassy.

Trade Fiendish Tome page 28 to the Nightmare Wellspring by the Archduke’s Reisdence.

Unlike other relic armor tiers, Aurix in Ru’Lude Gardens (G-8) will handle upgrades for Reforged Relic +2 and +3 gear and the job-specific neck pieces.