ZNMs, found in the Treasures of Aht Urhgan expansion, are a tiered system of progressively more difficult NMs with multiple paths. The Tier III ZNMs drop the starters for the Mythic weapons progression and Tier II and III ZNMs (among others) are trial fights.

Visit Ryo and Sanraku in Aht Urhgan Whitegate at (E-8). 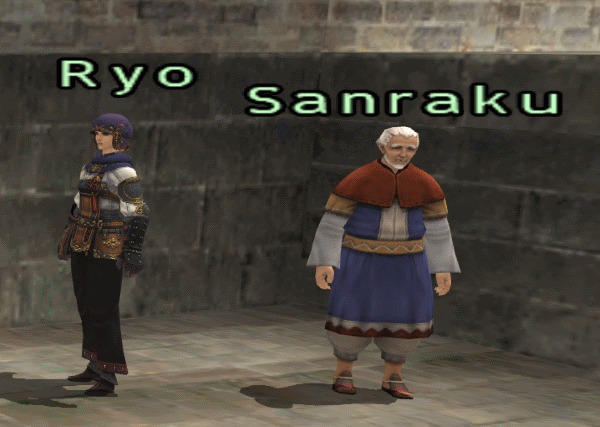 To participate in ZNM fights, you’ll need to purchase pop items (aka lures) with Zeni. Zeni is purchased with Gil by trading it to Ryo at a 10:1 rate (10 gil per zeni).

Each “tier 1” pop item costs a base zeni; however, subsequent tiers require both the zeni cost as well as a key item seal received from defeating the prior tier ZNM and turning in the item to Sanraku.

Once players acquire a lure from Sanraku, they can trade it to Ryo to be teleported to the proper location.

The amount of Zeni that a pop item costs varies with the tier of ZNM (higher tiers cost more Zeni).

To purchase any Tier II pop item, a Tier I monster in the given path needs to be defeat and that trophy item needs to be turned in to obtain the key item. This repeats for the higher tiers, Tier IV and Tier V need 3 key items to purchase the pop item. Use the flow chart below to find out which key item is needed to purchase the next tier’s pop item.

After defeating a ZNM, a “trophy” item bearing the defeated ZNM’s name is dropped. It can be taken back to Sanraku, who will give you a colored seal key item in return.

The seals allow the bearer one chance at purchasing a higher tier item (Zeni is still required for purchase). These are temporary key items and once you purchase a pop item from Sanraku for a higher tier ZNM, the lower tier seal is lost.

For example: If you kill Cheese Hoarder Gigiroon in Tier 1 you will get a Maroon Seal upon turning in Gigiroon’s Cape; now you want to kill Iriz Ima in Tier 2. As soon as you purchase the pop item for Iriz Ima your Maroon Seal will be lost. In order to purchase another, you must turn in another trophy item that bestows a Maroon Seal.