Empyrean weapons are originally from the Abyssea-era and corresponding zones. On Nocturnal Souls, we have a unique way to acquire and upgrade them starting at level 99 that involves acquiring the base item through normal Abyssea NMs and then upgrading it using either Abyssea or custom BCNMs.

Acquiring the Base Empyrean Weapon 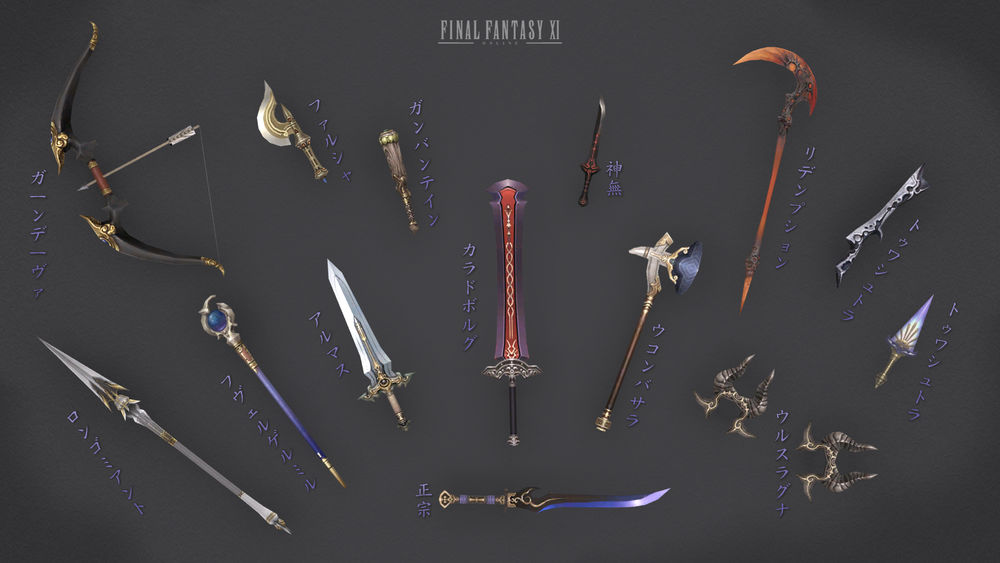 Empyrean Weapons are a series of powerful high-damage and low-delay weapons that provide high stats and unique Afterglow effects.

These weapons require items dropped from Notorious Monsters in Abyssea zones or through a collection of new BCNMs fighting ‘empowered’ versions of the NMs found in Abyssea (without the hassle of multi-step spawn process).

Empyrean weapons are acquired and upgraded with the assistance of Magian Mog AJ in Ru’Lude Gardens (phase 1) and Oboro in Port Jeuno (phase 2).

For the purposes of the “complete an empyrean weapon” achievement for future content, the Ochain and Daurdabla will not count towards this achievement as they do not have a final tier/Phase II.

Players hunting the monsters of Abyssea and the Enhanced Empyrean BCNMs should be wary–these monsters are significantly higher level than retail and pose a great challenge.

It’s assumed players are already using i119 weapons of some sort and have on at least Reforged Artifact +1 gear to bolster their accuracy, evasion, and magic defense. It’s also advised that players team up when fighting these challenging foes.

Unlike the relic and mythic trials, players will not receive “intermediary” step weapons between each trial, only between each phase.

Players can collect the required items one trial at a time or all at once; there isn’t a requirement to how the items are obtained or when. These items have two acquisition methods:

Players wishing to participate in the Empyrean Trials BCNMs can do so at the Abyssea - Empyreal Paradox (accessed via the Transcendental Radiance in Qufim Island, near Delkfutt’s Tower). Entering each fight requires a key to enter the battle (similar to the daily BCNMs).

These fights are limited to 3 players and designed to be more difficult than the normal NMs due to the relative ease at which they can be challenged. The Empyrean Weapon trial items are a 100% guaranteed drop.

In addition to the drops for the Empyrean Weapon trials, the BCNMs also have a chance to drop items required for the Tier III and IV armor upgrades and additional currency-type items that will be used at a later time.

Once you have completed each of the trials for Magian Mog AJ, you’ll be rewarded with the Level 99 II afterglow version of your Empyrean Weapon and will be ready to begin Phase II.

Congratulations–you’ve completed Phase I of the Empyrean Weapon trials!

However, you’ll need to convince Oboro to help you in your quest–and boy does he hate those Moogles!

Once you’ve got Oboro onboard (his dialog gives a clue into how to get him to help you), the phase is broken out into three stages.

To complete each phase, trade the base weapon, items, and gil to Oboro. You must have sufficient cruor for each phase to proceed to the next step.

* In addition to the stage 3 requirements, all players must win each of the Empyrean Empowered BCNMs and The Wyrm God (Shinryu) at least once on the character after being flagged to begin the Empyrean upgrades with Oboro. Defeating the BCNMs prior to being on Phase II will not count towards this requirement. Players can speak with Prishe at the Abyssea-Empyrean Paradox to see the current status of their Empowered BCNM completions.

For upgrade items dropped from monsters and BCNMs, the following rules apply:

Players can upgrade multiple Empyrean weapons at the same time as these stages are based on trades, not kills.

Players can now trade in their completed Empyrean ranged weapons to Oboro and receive an augmentable version of the weapon and an ammo quiver/pouch. The belts/quivers have no stats and provides TWO stacks of 99 ammo on use. The completed Empyrean weapons no longer give their ammos; players must complete the trade. This applies to:

Players will not receive their Empyrean Bonus (below) until they turn their weapon in for the augmentable version.

Players to complete their Empyrean weapon to i119 III will receive additional stat bonuses and an augmented weaponskill when the weapon is equipped in the main hand.

For more information on the enhanced weaponskills, click here and find the empyrean weaponskill in the list.